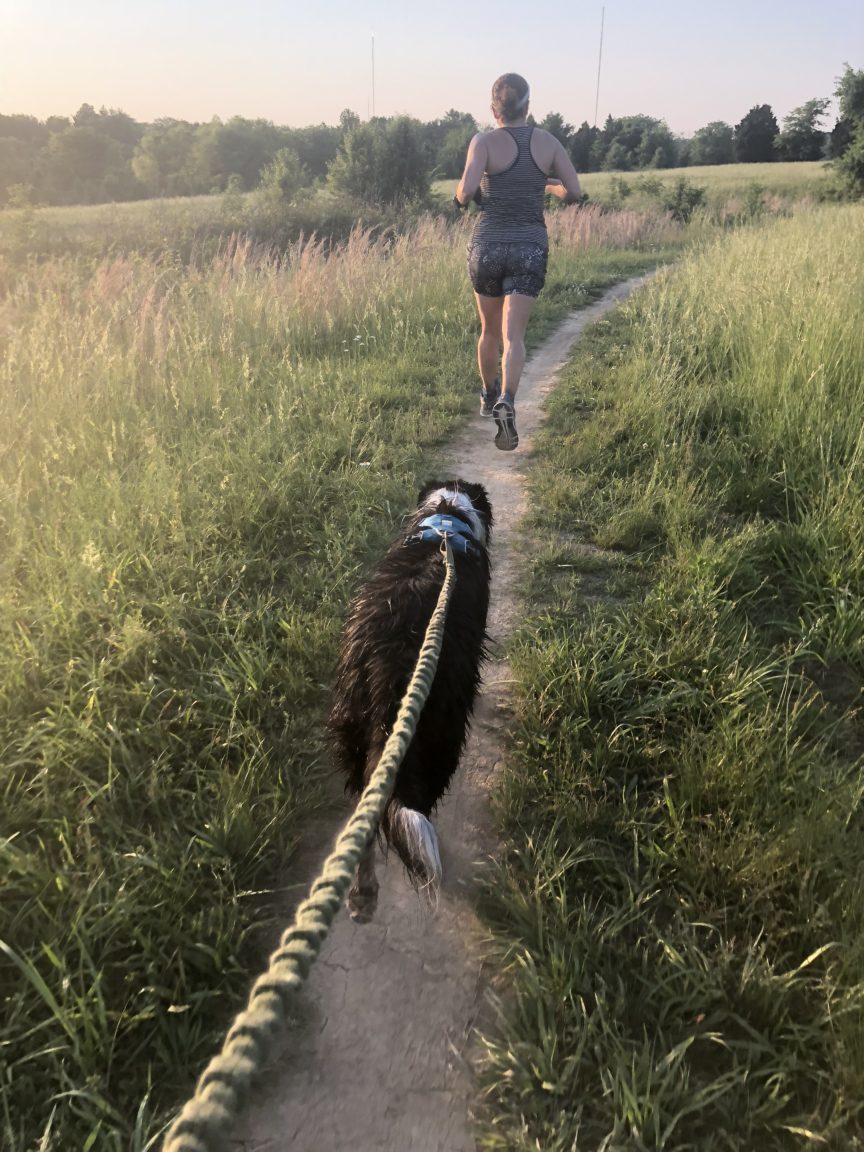 I thought that taking my dog to Latin America would keep me safe while running. I actually spend my runs defending him.

Let me describe to you today’s run, a fairly typical one in the last few months that we’ve driven from Mexico to Costa Rica.

As Barley and I head out the door, a neighbor calls to us, “Don’t go up the hill with your dog. The dog up the hill killed a dog last month.”

I turned and headed down the hill with Barley.

A few houses down, we both jump when a German Shepherd, Rottweiler, Doberman, and Cane Corso (I’m not joking) burst from a house, charging the heavy gate, saliva flying. I can’t help but wonder what would happen if we ran by while the owners were backing their car out and the gate was open.

Barley, like the amazing demo dog (he used to help me train aggressive dogs) that he is, grabbed a stick and asked me to play as a way to diffuse his own stress.

Just a few minutes later, three little mutts charge down a driveway, hackles raised and tails wagging antagonistically over their backs. Their weight is shifted backwards, though, and I’m fairly confident they’re bluffing (based on my years of working as a dog behavior consultant, I’m pretty good at judging body language).

I raise my hand over my head threateningly and they disperse, but they follow us for several more minutes, heads low and tails high. I look over my shoulder every few seconds to ensure they’re not getting too close.

Just a few minutes later, several more dogs charge out from behind another farmhouse. These ones are more serious, and I douse them with a heavy stream of Spray Shield. They scream in distaste and disperse, and I look over my shoulder to see them rolling in the grass to get rid of the nasty taste of citronella.

Another small dog chases us mere moments later. I kick gravel at this dog and he yowls as he curves away.

I resolve to turn home at the next dog. It’s not worth it. I’ve only gone a mile (and I planned on doing six), but my training goals aren’t worth sacrificing Barley’s safety.

On the way back, the same dogs that got sprayed earlier approach, a bit more slowly. The head dog that had been sprayed the first time around hangs back, but I have to spray the runner-up. Just before I spray him, a farmer makes biting motions with his hands in warning as he eyes the dogs approaching my dog. He gives an approving nod when I spray the dogs and they disperse.

We skirt across the street to avoid the house with four defensive dogs. I carry my Spray Shield in one hand, ready for oncoming dogs. A pit bull lunges at the end of a chain and we run past, just outside of its reach.

I put Barley away and continue on my run alone.

The thing is, this isn’t an isolated incident. Almost every run that I’ve been on in Latin America so far has involved me brandishing sticks, kicking gravel, shouting, or spraying off-leash and aggressive dogs. There’s never an owner in sight.

Most of these dogs are perfectly sociable with people. I had zero problems on my four-mile run once I put Barley away – but the two miles with him were full of stress.

I really thought that I’d appreciate having Barley with me while running in Latin America. I thought that, as a woman, having a 50 pound dog with me would make me feel safe.

But I spend most of my runs worried about Barley’s safety.

I don’t really blame these dogs or their owners. I get it – they’re farm dogs and guard dogs, and the dog owning culture here is pretty different from the dog-friendly bars of Denver.

But running is one of the main times that I really, deeply miss being in the U.S. I yearn for a running trail with mostly on-leash dogs.

I am hoping that once our car Turtle is out of the shop, I can drive Barley to some trails for a bit of peace and quiet on our runs. But until then, it looks like I’m better off running alone. I’m more likely to get injured breaking up a dog fight than I am to get attacked while running, it seems.

Sure, there are still some off-leash dogs and plenty of reactive dogs in the U.S.

But it’s nothing like what I went through in a 20-minute run today.