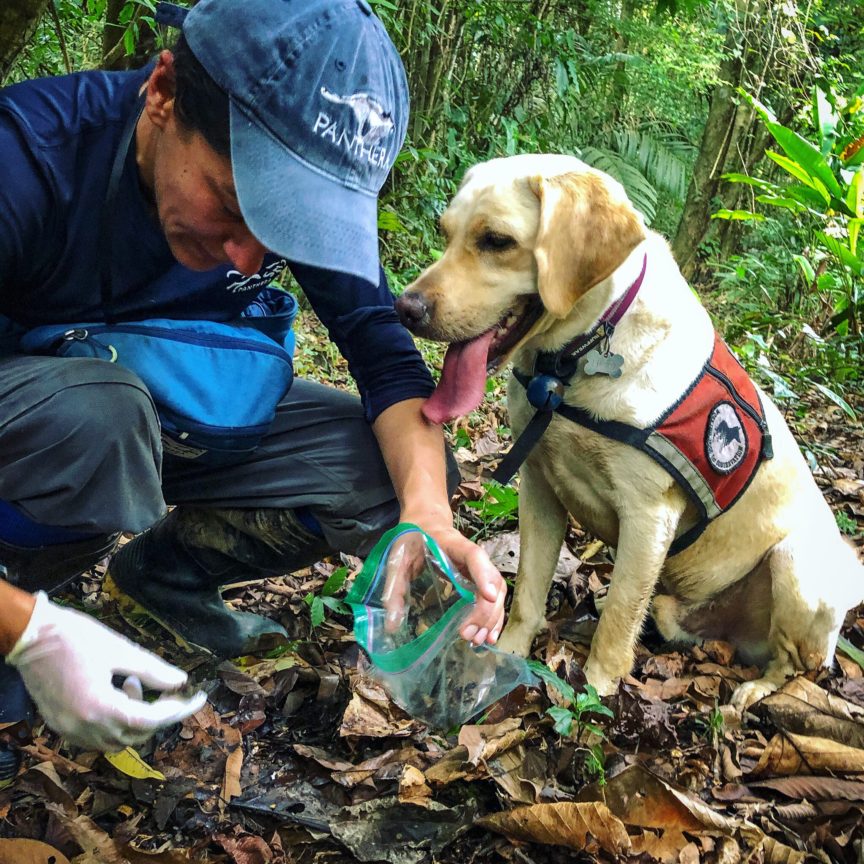 I woke early, packed my bags and left the Airbnb in Ezcazú (a suburb of San Jose). I arrived bleary-eyed to a wagging lab and his handler, Stephanny. She warned me, “He jumps.”

And jumped he did – Tigre left a few tiny bruises on my arms as he chomped on my wrists. He calmed down quickly, though, as we packed up the car.

We were about to head out to track jaguars.

Ok, so not quite. Technically, we’re finding wild cat scat (poop) with the help of Tigre’s nose. We’re not following the scent trail with the hopes of seeing a jaguar, and Tigre is actually trained to find the scat of all 6 wild cats that are native to Costa Rica: jaguar, ocelot, margay, puma, jaguarundi, and oncilla.

Tigre was trained by Working Dogs for Conservation for this work after he had a “career change” – he was too high energy for his original job of helping veterans with PTSD. His handler, Stephanny, is an employee of Panthera. She and her partner Ian are truly jaguar-lovers! Ian also works studying the coastal jaguars in Tortuguero National Park.

We tucked into a delicious breakfast at Bambu, a little roadside eatery that had some of the best huevos rancheros (with pinto rice and beans) I’ve ever had! Not quite the same as Mexican or United States, but… better?

Almost four hours after leaving San Jose, we turned onto a rough country road – and I mean rough. Not quite Baja-California-Rough (remember that time we almost died driving there?), but pretty bad. I can’t imagine sections of that road being passable in the rainy season – sections were strewn with huge river rocks and the road was clearly underwater at times.

We eventually found our way to the farm after passing several clusters of abandoned houses. I assume they were housing for farm hands, but they were clearly empty now.

We settled into our little cabin, which had no glass or screens in the windows. There was a shower and a few lights downstairs, but upstairs there was no electricity.

After spending some time relaxing in the heat, we headed out for our first day of searching.

Our guide struck out ahead of us, setting a tough pace up a steep hill. The path was muddy and overgrown, a bit steeper than I’d expected. After just 15 minutes or so, we came across a little snakelet – a Fer-de-lance. Our guide whapped it with a machete. Though the biologists winced a bit, no one said anything. Fer-de-lances are quite dangerous, especially when they’re young. In fact, they’re often considered the most dangerous snakes in the Western Hemisphere. If you’ve got the stomach for it, check out the picture on the Wikipedia page under venom to see what they can do.

We spent the next few hours picking our way along the path. Ian and I stopped frequently to take photos of things. Tigre’s tail never stopped wagging as his nose worked. After nearly 7km of hiking, though, Tigre hand’t found anything yet.

Towards the end of the day, we turned onto a smaller trail with denser overgrowth. Our guide and Stephanny took the lead for most of the day, with Tigre at Stephanny’s heels. Ian and I followed after. This helped us watch out for snakes that Tigre might miss!

As we rounded a corner, there was a shout. Stephanny called Tigre back and I craned my neck to see what was going on. A huge black snake lay curled at Tigre’s paws.

We investigated it a bit, but no one could figure out what species it was – probably some sort of rat snake?

Shortly after, Tigre shot off the trail. He stuck his head into the roots at the base of a kapok tree, snuffling audibly. Stephanny dropped her pack and carefully made her way over to the wagging lab. He pranced back and forth, practically vibrating in anticipation of his ball. Stephanny picked through the litter until she found the scat. Once she was satisfied that he’d made a find, she started tossing his ball for him.

Ian asked if I wanted to help, so I made my way over to help write down all of the information about the scat while Stephanny collected it. Tigre waited by, his tail still wagging.

And then we were off again. What seemed like mere seconds later, Tigre hit on another sample – a larger one, this time right in the center of the trail. Again, he was rewarded with a ball while we prepared the sample.

The trail rejoined the larger one shortly thereafter, and we started making our way down a steep hill. As the sun got lower in the sky, Tigre again bounded off the trail. This time, we found him snuffling about near a dead armadillo and an older sloth carcass. He wasn’t after the dead stuff, though.

Even Ian said he could smell scat. He said the prey caching behavior was more typical of a Puma. But after picking through the undergrowth for several minutes, we couldn’t find any scat. So we went Tigre off again.

We came to the bottom of a huge hill, sighed, and pressed on upwards. Tiny strawberry poison dart frogs leapt in every direction.

After cresting the hill, we wound our way down to the farm again. As we rolled out our ankles and picked burrs off our pants, we guzzled down several “pipas” – tasty green coconuts. We clocked 9km total, but it was some of the hardest 9km I’ve ever done!

We had a delicious dinner of leftover “casado” from Bambu (our breakfast spot). I curled up with Game of Thrones, listening to the buzzing of the carpenter bees that lived in my walls. We all fell asleep around 7:30pm.

It rained that night, but I slept like a rock. We woke early to make breakfast before heading out around 7am to finish out the trails.

Saturday was harder than Friday. After just 2km of relatively open trail, we veered off into the forest. This so-called “poacher’s trail” was completely overgrown. We headed straight down a steep slope, scrabbling through vines and mud. I just hoped there weren’t more fer-de-lances hidden among the underbrush. Our guide hacked a path with the machete, but I honestly don’t know if I could have found the trail without him.

I’m very proud – I only slid down a hill on my butt twice.

We did find lots of amazing bugs as we went.

It took us nearly an hour to go the next kilometer. Of course, Tigre was fine – but he didn’t find any scat, either.

I brushed up against a stinging plant and kept worrying that I’d wipe the irritant into my eyes when I tried to mop away my sweat. But I was happy. Ian kept pointing out birdcalls and Tigre’s cheery bell kept us company when the birds fell silent. A troop of capuchins threw giant sticks at us, which was a bit scary.

We came across a phoneutria spider, which scampered away when Tigre nearly stepped on it. These tarantula look-alikes are pretty venomous and can be quite ornery, but we passed by it (and a few more like it) without incident.

Tigre found two more scat samples on Saturday – both quite old and right on the trail. Ian pointed out that stuff rots incredibly quickly here, so the samples might not have been very old even though they were already basically just bones.

It started to rain just as we returned to the farm. We slurped down more pipa in the rain, then took turns stripping off our sweat-soaked clothes for a cold, dark shower.

We stuffed ourselves on lunch and then siesta-ed for a few hours, slipping between dozing and reading. After a few hours, I headed out for a walk alone. I didn’t really want to walk more, but I needed a break from propping up on my elbows and reading about Theon Greyjoy and Tyrion Lannister and all the rest.

The white-collared manakins were in full swing, their wings clacking together like river pebbles as I walked along the rough country road. I didn’t see any, but here’s what they look and sound like.

We headed to bed early again. The next morning, we headed back to San Jose.

We’ll be here in San Jose until March 15 or so, then we head back to the beach by Santa Teresa.