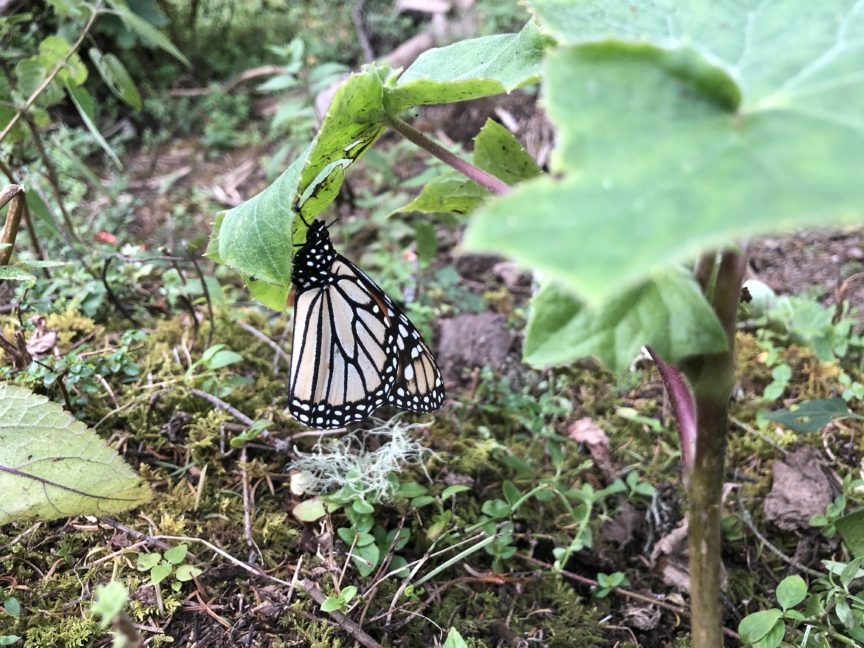 Written from the perspective of Barley the dog.

Mexico City kind of reminds me of Denver. There are mountains nearby (though you can’t really see them), the city is full of cool bars, and Paula’s neighborhood feels bustling and energetic.

Our daily walks are much more relaxing than in Guadalajara or La Paz, but not quite as scenic as Puerto Vallarta. The dogs here are mostly polite, and there’s a park just a few blocks away.

While Andrew was gone in Denver, Kayla pretty much just worked and hung out with me. Paula works really long hours, so the two of us just hung out in the evenings for the most part.

Driving through Michoacan for Hours

On Thursday, 12/6, Kayla wrapped up work around 1 PM and we climbed into the car. She turned the headlights west and started driving up into the mountains.

Our destination: the monarch butterfly preserve in the state of Michoacan.

We drove past endless fields and flocks of sheep, climbing through the mist into pine forests that smelled like Colorado. Flammulated owls, a tiny species that Kayla’s college advisor studies, spend their winters here. No wonder why – it feels like the Colorado foothills.

After nearly two hours of driving, Kayla’s GPS announced we’d arrived. But the car was at a Y-fork in the road, far from any apparent UNESCO World Heritage Site.

Confused, Kayla spoke to a nearby vaquero who stood smoking with friends. He explained that the monarch preserve closes at four o’clock. She checked her watch. 3:58. A single monarch flitted by as Kayla looked dejected.

Defeated, we turned around. We wound through the fog as it started to drizzle lightly. We found a little stream by the side of the road and stopped to play some fetch. The air was crisp and I was just happy to be outside, to be alive.

We hit terrible traffic on the way home. Kayla caught up with at least four loved ones while we crept through the streets. Six hours of driving for little more than a game of fetch.

That night, Kayla spent a few hours agonizing over whether to attempt to climb Iztaccihuatl (a 17,000 foot volcano just outside of the city) or to make another attempt at monarch viewing.

After researching peak conditions and realizing that I wouldn’t be allowed inside of the national park, she opted for the monarchs. The mountain was a bit too snowy, and she’d have to start so early that I’d be left alone for too long.

The Monarchs of Michoacan

On Friday, Kayla worked for just an hour or two before packing up the car to try again for the monarchs. She decided to leave me behind this time since I’d actually be more comfortable at home than in the car for six or more hours.

It took a lot, but she found the UNESCO World Heritage Site. The monarch preserve at El Rosarito is not where Google Maps says it is. If Kayla didn’t speak such good Spanish and wasn’t lucky with some helpful villagers, she might have gotten skunked again.

Overall, people in Michoacan were friendly and helpful and warm. Kayla stuck to the toll roads and tried to only speak to groups of women and children. The one man she spoke to for directions demanded 50 pesos for a “foreigner tax.” He also leered into the back seat, asking if she was alone. So she paid and drove away.

I wish I’d been there to growl at him.

Michoacan gets a bad rap. But the driving there was gorgeous. Thick ribbons of mist wind through fragrant, towering treats. Dogs of an unknown breed (they look like mutts) help tend to flocks, driving the sheep away from the road or just standing watch from the shepherd’s side. Villagers sell tiny reindeer made from pine boughs, poinsettias, and strawberries along the roadside.

On the way up to the entrance, you wind through tiny shops selling scarves and trinkets. It’s mandatory to have a guide, but Kayla arrived late enough that she got a guide all to herself.

She and the guide headed up the steep hill, sweating despite the cool fog. They chatted about Michoacan, politics, and biology.

Let’s talk about those monarchs for a second. Kayla grew up in northern Wisconsin with a biologist father. Late in the summer, she and her dad would participate in a citizen science monarch project, catching monarchs and taking down information on the butterfly’s location before affixing a tiny sticker to its wing. Other citizen scientists would do the same along the butterfly migration route, helping to track the actual route for the butterflies.

Her second-grade class raised monarchs to release to the wild. Kayla’s childhood is full of memories of watching as the caterpillars grow from smaller than a grain of rice to pinky-sized behemoths, fat and striped. The caterpillars gorge on milkweed before hanging upside down and turning to a chrysalis.

That chrysalis starts out a brilliant green with tiny dots. As the butterfly readies to emergy, the chrysalis turns black and orange, the eventual color of the butterfly’s wings. Kayla has raised and released countless monarchs.

In short, she loves these butterflies.

After about 25 minutes of hard hiking (most groups take a bit longer, but Kayla skipped her run and wanted to work a bit), Kayla’s guide announced quietly that they’d arrived.

A winding dirt road dead-ended into some cordons. Other visitors were silent, gazing upwards through the thick fog.

Kayla wiped off sweat and trained her eyes on the monarchs, dripping off of the trees above. They were still and quiet on account of the cold, but hundreds still swirled among the treetops.

Just beyond the cordoned-off edge of the trail, several monarchs lay dead or dying among the underbrush. A few fluttered with torn wings, quietly spluttering. Given that most of the monarchs here go without food for a few months, it’s surprising there aren’t more dead ones. The monarchs stay pretty still on cool days, conserving energy.

The experience was surreal, dreamlike, and a bit magical. She didn’t get the front-cover-of-National-Geographic-worthy cascade of jeweled wings that can occur on a sunny day here, but the peaceful whispering of billions of butterfly wings was enough.

Kayla and her guide lingered for a while, waiting to see if the fog would lift enough for the butterflies to wake a bit. But the clouds were thicker than ever, so eventually she headed back down the mountain.

Six hours of driving on Thursday and eight hours on Friday, but she told me she regrets nothing. She just has to come back on a sunnier day in the future.

That evening, Andrew came back from Denver. I was so happy to see him that I hit myself in the ears with my tail. We all got dinner (yes, they shared their shrimp and steak from the molcajetes with me), and then we went to bed.