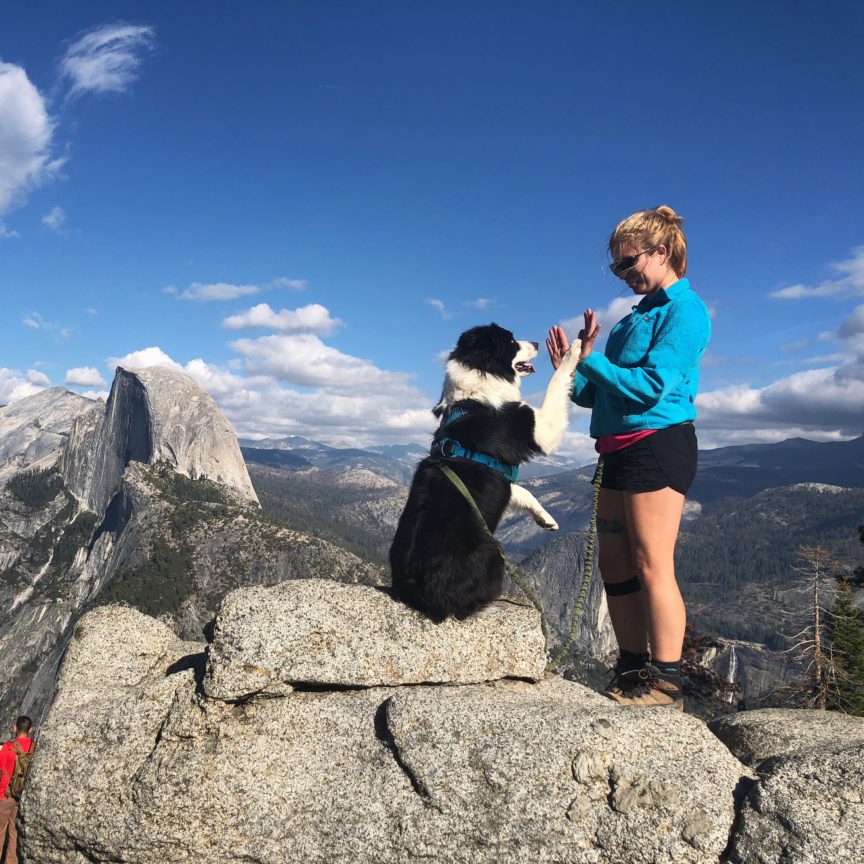 As we drove towards Yosemite last week, Kayla pulled up her phone. She knew that most National Parks don’t really allow dogs, but she wanted to see if we could do any hikes together. I don’t really like going to the boarding kennel and I REALLY like hiking, so we figured it would be fantastic to bring me along.

All of the sites like BringFido and DogTrekker and even Yosemite’s official NPS site tried to put a positive spin on things. The Yosemite.com says, “Some very popular trails and attractions allow you to take your pet restrained on a leash.”

The article then lists out six different dog-friendly hikes. It’s clear that dogs aren’t allowed on the vast majority of trails in Yosemite (or most other National Parks), but we were excited about the list.

I guess that some other dogs like to bark and chase animals. And some owners don’t like to pick up their dog’s poop and let their dog run around like mad-dogs. Maybe they ruined it for all of us.

Anyway, Kayla and Andrew left me at Big Creek Boarding on the first day. They went rock climbing in Tuolumne Meadows, where dogs are decidedly not allowed. I spent the day playing fetch with Bonnie, the owner of Big Creek Boarding. Not so bad.

On Tuesday, Kayla was still pretty sore from her marathon (which was on Sunday). So she and Andrew decided not to do the 12-mile hike they’d originally planned on. A bit disappointed, they decided to bring me along and test out these supposed dog-friendly hikes in Yosemite.

May I complain for a moment?

They were not hikes. These six trails were paved, each only 500 meters to a mile long. They basically went from the cars to an overlook and back.

“Hike” is an incredibly generous term for these paved trails.

Look, I get it. I’m a very good boy. I’m one of the best dogs there ever was. But really? The only place a dog is allowed is on a 500-meter paved overlook for Glacier Point?

I know that many dog owners are irresponsible and let their mongrels poop on the trail, chase moose, and jump on little Junior Rangers. But not all dogs!

What if There was a Permit Process for Dogs in National Parks?

What if Kayla had to pay a small fee and sign some paperwork, and I had to pass a little obedience test?

I’m sure we’d sail through with flying colors. Maybe we’d be limited to some remote or unpopular trails. Of course I’d be kept on a leash and all poop would be disposed of properly.

A permit system would allow some well-behaved outdoorsy dogs to actually stretch our legs without disturbing the peace. It seems like a reasonable proposition to me.

I get it. Most owners could just leave their dogs at home with a sitter while they go backpacking. Or they could choose to hike in a National Forest or BLM land instead. But Kayla and Andrew live in their car. They don’t have anywhere to leave me. And sure, we could have just gone to some BLM land. But we wanted to see El Capitan and look out over Half Dome. And they wanted to bring me.

It seems like there could be a compromise that works for dogs, wildlife, visitors, AND parks.

Rant over. Yosemite was gorgeous and we had fun. But it sure would have been nice to enjoy a proper hike, not a paved little overlook.

Before Yosemite, We Explored the Bay Area.

Let’s go back in time a bit. We last spoke on September 17. We were in Vacaville, staying with Kayla’s Air Force Academy friend and his wife and cat.

We left a few days later, heading for Vallejo. Andrew went into San Francisco during the day several days. Kayla worked from home with me quite a bit. Other days, she left me with Scruffy the dog or brought me to and outdoor coffee shop.

We did a lot of running as Kayla prepped for her marathon. I got fleas, but Kayla found them right away and I got treated. I was flea-free within 48 hours. That’s got to be a record!

I’m now wearing a Soresto collar and Kayla has some oral flea-killing tablets on deck. She said I’ll probably get more fleas as we go south.

Kayla and her friend Hana took me on a super duper 12-mile hike one weekend. Kayla hasn’t seen Hana since graduating Colorado College – they were on the same hall as first-years.

I ran around like a crazy dog and went swimming about 14 times! I just love love love hiking, it’s my favorite. Andrew took me to a beach one day and fed me ice cream.

After Vallejo, we drove into San Francisco proper. Kayla and Andrew had a concert – this guy called Bassnectar. I could hear the pumping bass from the hotel, blocks away!

Just kidding. They left me with a dogsitter miles away so that they could stay out super late.

The dog sitter was very nice, but I was excited when they came back to get me.

I’m always glad that they didn’t forget me.

Walking in the city was no fun at all for me. There were smelly homeless people everywhere who moved funny and made weird sounds. I don’t like big hissing busses, and I kept my tail tucked tight so no one could smell my fear for most of our walks. Kayla tried to take me to parks, where I felt better. But honestly, those narrow sidewalks full of passed-out homeless people ruined it for me.

I was excited when we packed up for Sacramento.

Our AirBnb in Sacramento had two gorgeous, happy dogs that played lots of fetch and shared their pool with me. Their owners were super nice too. I liked it there – a huge backyard, a quiet street for walks, and mild weather. We didn’t find much for hikes, but at least our walks were pleasant.

We left Sacramento on October 5 to go northeast. We ended up in this little bitty town called Susanville, where we stayed on a little farm. I love farms. I just want to be a farm dog.

Kayla ran her marathon (26.2 freaking miles) on Sunday, October 7. She left me behind, which made me bark. A lot.

Help Me Run My Own Race!

She says we’re running a canicross race (to raise money for charity) on 10/27. Please donate — if we raise $100 for other pups, I get to race for free!

And I love running. If you can’t make the minimum donation ($10), you can email us (woof@elperrotambien.com) and we’ll let you know how to send $1, $2, or $5. Kayla can aggregate the money and make a $10 donation when there’s enough.

Anyway, the money you donate will go directly towards helping rescue dogs (like me)! As an added bonus, I’ll get to run my little heart out in a race all my own.