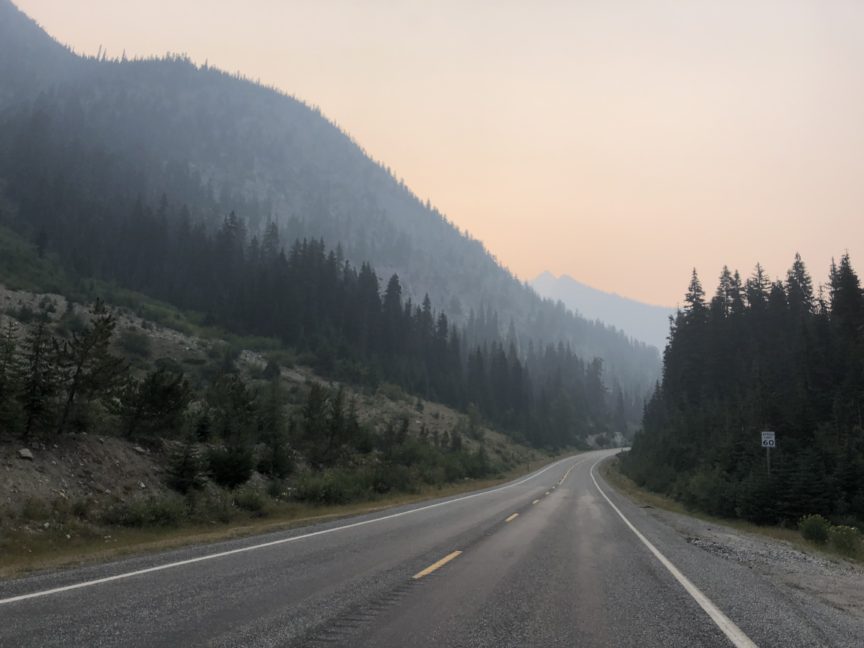 I tug, wrenching my butt up and bending my front paws. My teeth feel strong, biting into the flesh of this stick. My claws dig into the sand, and I wag my tail a bit. The stick doesn’t budge. It’s longer than I am, protruding from an underwater tree. I’ve been working at it for ages, up to my belly in water.

The air smells of smoke, a thick acridity that leaves my eyes and nose a bit goopy. It masks some of the other rich smells of the forest, but if I flick out my tongue near a good scent, I can get a good idea of what I’ve found.

I shake off, rigorously rotating my fur and skin. Lap a few sips of water from the roaring river. Back to tugging.

Kayla sits on a log, tapping away on her laptop. I don’t mind – I’m having fun by myself. The river carries scents with it, and I pause my tugging to taste the air every so often.

We’re 15 miles down the Pacific Crest Trail, staying in a cabin with Kayla’s friend Betsie. Betsie works with horses, these enormous stinky creatures that are neither sheep nor elk. They watch me with alert ears and serene eyes, and I can’t decide whether I’m to herd them or avoid them. Kayla keeps me tied down near them, so I guess they’re not meant to be herded. Today is August 15, 2018.

We have been outdoors nearly nonstop for three days, and I think I’m in heaven. I rarely wear a leash and there’s water all along the valley. The place is called Stehekin.

Kayla says we’re leaving tomorrow. That means we’ll see Andrew soon, so I’m ok with that. I miss his belly rubs and our tug of war games.

The Northernmost Tip of the Trip

The two weeks or so have been a roller coaster. After leaving Vancouver, we drove further north to Kelowna on August 3, 2018. That town is full of the scent of beer and poutine, boat gasoline and sunscreen. We met up with Luke, a tall bearded man who lived with Andrew in college. They took me to a beach, then I slept at their feet at a bar. A young puppy, not even old enough to be neutered, shadowed me around. His name is Ziggy.

Luke, Andrew, and Kayla took me out on a stand-up paddleboard the next day. I love water, but the rocking and rolling waves had me belly-down. My claws gripped the board and I tried to keep my rump against Kayla’s ankles. I felt safer that way. Boats roared by with waterskiers in tow, rocking us in their wake. I did not like that part. When the water was smooth, I could sit up and survey the lake. I could enjoy this in calmer seas.

The next day, we went rock climbing. Kayla felt pretty sore, so she just explored around with me. Luke and Andrew climbed up these magnificent basalt towers. Hexagonal columns jutted from the ground, and they slipped their hands into the cracks between. They climbed up, up, up while Kayla and I explored the scree field below. A perfect day.

Back to tugging. I can’t seem to get this stick detached from its parent for the life of me. It’s the perfect width, smaller than Kayla’s wrist by half. An ATV whizzes by, momentarily distracting me.

After our day of climbing, we clambered back into the car. We turned our noses south and drove. Kelowna was the furthest north we’ll go on this adventure.

The stick breaks, yielding a nugget of broken wood. Not what I had in mind. I seize the root stick anew, tugging again. A good fetch stick must be at least as long as my nose.

We ran out of gas after leaving Kelowna. Kayla sat on the side of the road with me while Andrew went to fetch gasoline. An adventure indeed. Crossing the border back into the US was easy, though the man at the booth seemed less friendly than the last. They didn’t even look at my vaccination records. Our last day in Canada was August 5, 2018.

It’s All South From Here

We spent another week in Seattle. I love my long evening walks with Aaron, Andrew’s youngest brother. Everyone greets me when they come home, and I’m rarely alone. Kayla took the day off of work on Thursday (August 9) and took me hiking with her friend Kate and Betsie. I ran around off-leash and dug in the water.

Kate is from Kayla’s high school and is studying to be a therapist. She is so kind. Jess is Kayla’s old college housemate, and she has bright eyes and a fun smile. Neither one of them will throw my stick, but I think that’s Kayla’s fault.

On Friday (August 10), Betsie and her younger brother came by Andrew’s family’s home. They took a bag from Kayla and my leash, and I went to their home for the weekend. I spent my days playing fetch and lazing around alongside Lucy, Betsie’s dog.

Meanwhile, Kayla and Andrew were at a wedding. Andrew’s cousin Katie married a man named Will on August 11, 2018. From the sound of it, my humans had a blast. I played fetch while they drank alcohol, and I slept while they danced. Kayla picked me up on August 12 and we drove out to the trailhead of the Pacific Crest Trail. We hiked 15 miles together on August 13, and have been here ever since.

I shake off again, high-step to shore. Roll in the sand, sneezing happily. I can smell a fish was once dead here, so I grind my shoulder into it. Shake off again, wag over to say hello to Kayla.

She glances up at me and smiles, and I can smell her serenity. None of the stink of stress that sometimes follows her. I wag and snort, trotting back to tug on my stick. Maybe it’ll break this time. Maybe not. I don’t really care anymore, the tugging itself is fun.