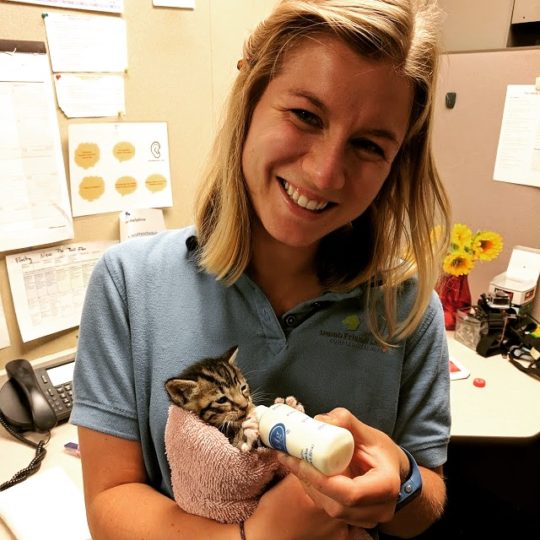 Animal shelter work is not easy. As a member of the Denver Dumb Friends League behavior team, I spent my days dodging urine, blood, and teeth. My job is to use science-based behavior modification techniques to help traumatized shelter pets become safe companion animals. Rather, that’s what my job my job was. I’m leaving Denver Dumb Friends League in four days to pursue a dream road trip. I’ll still be doing similar work at Journey Dog Training while we travel.

I’m really going to miss the amazing, dedicated people that I worked with during my time at Denver Dumb Friends League.

Denver Dumb Friends League (DDFL) is one of the largest animal shelters in the US. It is open admission, meaning it accepts all animals of all shapes, sizes, and conditions. We work with fear, aggression, reactivity, overstimulation, and much more. The animals I work with are not ready for adoption – yet. 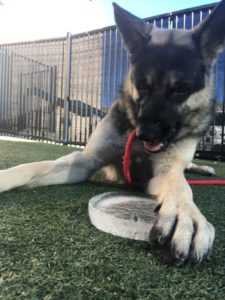 DDFL could not operate without the help of our partner shelters and rescues. This shepherd went to a rescue due to his medical problems.

I’ve stood on the other side of a kennel doro from dogs that have killed other dogs or sent babies to the ER. I’ve scratched 17-year-old cats behind the ears, knowing that those lumps mean the cat won’t ever make it to the adoption floor. Euthanasia is a reality, though DDFL boasts a 90% “live release rate,” meaning 90% of the animals that come into our doors leave with an owner or a rescue.

When a shelter sees upwards of 20,000 animals per year (yes, you read that right), you pretty quickly get to “see it all.” In the 16 months I spent at DDFL, I worked with more animals and people than many professional trainers get to work with in decades of work.

While at DDFL, I helped run a free behavior helpline that gave behavioral and training advice to any owner in the world, free of charge. I created a new questionnaire to gather better background information on our clients, streamlining the help call process. I spearheaded a program on puppy enrichment and socialization and helped revamp our training program for high energy dogs. After a series of difficult behavioral euthanasia decisions, I helped my supervisor create a dog behavior scorecard, ensuring a bit more equity in the euthanasia decision process down the line.

Shelter work changed the way I look at and interact with people. It’s taught me compassion, resilience, and innovation. Even Colorado College’s infamous Block Plan didn’t push me to creative solutions with such tight deadlines and high stakes.

Lessons I Learned from Working in an Animal Shelter

I learned that most of the time when someone says, “I can’t keep him, I’m moving,” they really mean something else. It could be their mother is dying of cancer and they’re moving in to help her, and can’t keep their dog in that apartment. It could be that they lost their job and are moving in with friends or to a new zip code where pit bulls aren’t allowed. Or maybe they recently had a baby with serious medical issues, and that high energy cattle dog is just too much.

As much as I love dogs, I can’t say I expect anyone to give up on their family in order to keep their pets. I don’t even know if I would. Working at a shelter reminded me that anything can happen at any time to anyone. Be grateful for your good fortune, show compassion for those who are struggling, and plan ahead for the inevitable bumps in the road.

I’m not a naturally patient person, and I can get frustrated easily. Working with high energy teenage dogs that have never had any training for 10 hours per day is a lesson is patience and pain tolerance. It took time, but eventually I learned to take a deep breath and remind myself of what these animals are going through. Their mouthing, jumping, and nail raking hurts – but it’s because they don’t know better, and they’re stressed out.

My training skills got better, but the biggest change I saw in myself was my own ability to deal with frustration. Dogs that bark incessantly, jump and mouth me, or slam into my legs in a (terribly irritating) attempt at play no longer send me spiraling into frustration. I developed coping mechanisms while teaching dogs the same. 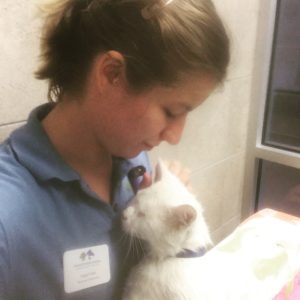 Snowball was one of my “staff favorite” cats, who was adopted the day after I took this photo.

When I’m working with clients at Journey Dog Training, I have their attention (usually). They paid good money for my time and expertise, and many people respect that. They want to learn, and I have their focus for an hour. I can dive into Applied Behavior Analysis and antecedent arrangement and leave more to cover next week.

The shelter is different. Either I’m providing a free over the phone service, or I’m sitting down with a harassed and tired couple who’s been in the shelter for hours. Regardless, I need to keep my points simple and concise. This is not an easy thing for me – see my rambling blog posts as Exhibit A.

Explaining how to change a human’s behavior, how to train a cat, or how to safely manage an aggressive dog is never easy. Yet DDFL taught me to do this over the phone and when I have maybe 40% of an adopter’s focus left. Verbal bullet points, repetition, metaphor, and tactical anthropomorphism quickly became my normal.

Occasionally I got to dive into predatory drift with a particularly attentive adopter or clicker training with a savvy helpline caller. But mostly I simplified and distilled information into its bare-bones minimum components.

Just last week, I held a dog while she died. She was my favorite dog at the shelter. I’ll call her Julie, though that’s not her real name. At four years old, she still had lots of life ahead of her. She was physically healthy. She’d spent the last year of her life crated nearly 23 hours per day. She was anxious to the max and had a “bite record.” I fought hard to prevent her euthanasia, but I lost out. Her constant whining, pacing, and general anxiety made her just too much to handle in the eyes of the shelter.

I cried, stroked her fur, and took her collar tag home, tucking it in among a few others. Another tag came from a one-year-old pointer mix who bit and broke skin too many times when playing tug. Then there was the lab who jumped and mouthed, ripping clothes. He was adopted, but promptly returned for crippling fear. Those ones were hard. I have their names jotted in the margins of my journal with their full stories, as much as I know. It helps to keep those close. It makes me feel like someone cared for them, though I’m sure I’m not the only one.

There are some euthanasia decisions that are relatively “easy.”

There’s the pit mix that sent a two year old to the ICU on Christmas Eve, the doberman that bit a volunteer who offered her hand to sniff, the chihuahua who screamed and defecated in terror when you touched her, the mini Aussie who ate her own puppies and shook if you even glanced her way. There’s the blind and toothless cat who hasn’t eaten in weeks and has kidney stones, the “screamer” cat that launches himself at the bars with claws out and has a history of biting people in the face while they sleep. 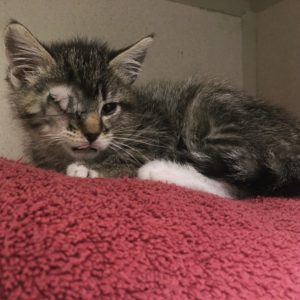 Shelters do so much to save animals that come through their doors – like this little kitten who lost her eye. For some others, humane euthanasia may not be worse than living.

Many of these animals don’t “deserve” to die, but they also are not safe animals to adopt out to our community. That balance is the hardest lesson I learned while working in a large open-admission shelter. DDFL cannot hold animals indefinitely for behavioral rehabilitation.

DDFL also is a big name in animal welfare, and that PR hawk is always on their shoulder. I thought of that the day that I learned that a dog I adopted to a good friend bit him and his girlfriend multiple times in the first 24 hours at home. That dog was returned and euthanized. Good thing my friend came to me, rather than a media outlet. Imagine the headlines.

The same goes for the boxer mix that I initialed, “Behaviorally sound for adoptions, KMF.” He dragged a six-year-old child off her swingset by her hair and bit her on the hip. She was physically unschathed, but that dog stalks my dreams. Imagine those headlines had she not been ok, had her parents decided they wanted to harm the organization.

It’s easy to get bogged down by the hard decisions of working in an animal shelter. There’s always a clock ticking. While DDFL does not euthanize animals for time or space, we also do not work with animals indefinitely on the behavior team. The behavior team is expected to be able to make a turnaround with animals after about six training sessions. Of course we can extend animals out for more work. It’s astonishing how many animals do make a turnaround in just six training sessions – the magic of counter conditioning, I suppose.

But there are times where our basic counter-conditioning protocol stalls out. Animals might be too stressed or have too dark of a history for a few short training sessions to “fix” them. DDFL’s behavior team does an amazing job working with fearful dogs and cats, but our setup is not good for high energy dogs. A kennel environment isn’t ideal for teaching a dog to “settle” calmly, and twice-daily walks are nowhere near enough to run off excess energy.

The creativity and resourcefulness of DDFL’s behavior team astounds me. With a tight schedule and limited resources, the seven-person behavior team takes thousands of animals from “unadoptable” to “adoptable” each year. While a “failed” animal does not necessarily lose its life, the pressure to use positive reinforcement training to create amazing turnarounds is a great impetus for creativity.